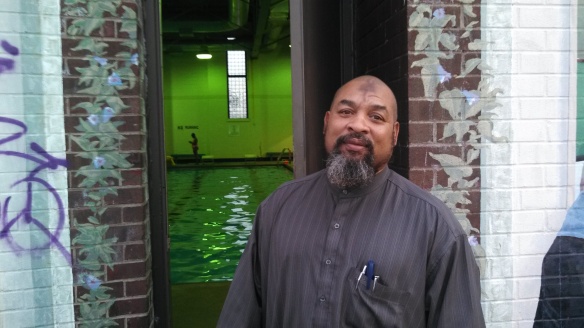 Work with the pools: As a lifeguard, Water Safety Instructor (WSI) and Lifeguard Instructor (LGI) at Sayre-Morris Pool since 1989

Larry Brown’s face lights up when he talks about swimming. “Swimming, it’s an art. Kicking your feet, using your arms, sucking the air in, blowing it out under the water. When your legs kick six times, your arms move once. We need to take more time out to show children how to swim,” he says. “It gives them an outlet to do something that other athletes can’t do. A lot of athletes can’t swim. They’re scared of the water! I’m talking, you’ve got major athletes, who make millions of dollars, scared to put their foot in the water. So now you have somebody, right, doesn’t make all that money, doesn’t have all that fame, can get in and swim without drowning. That’s important.”

Larry knows something about showing children how to swim. At Sayre-Morris Pool since 1989, he’s taught hundreds of West Philly kids. “The most rewarding experience is seeing little kids develop into swimmers, or develop into lifeguards,” he says, smiling. And anyone who’s ever taken a lifeguarding course with Larry (including me) knows that every session starts and ends with swimming laps – and a reminder of the how important it is to swim, and let others see you doing it.

Opening his hands toward the swimmers gliding back and forth through Sayre’s clear blue water, he explains: “It’s a sport where it’s only you. You gotta go up; you gotta come back. Nobody can do it for you.”

Larry is the only one of Philadelphia’s seven Water Safety and Lifeguard Instructors who’s worked at the same pool since he started — and his history with Sayre-Morris goes back much farther than his employment. Larry remembers the pool opening when he was a young teen in the early 70s. “Back then it was gang war. I would come up here knowing that I would get chased. Most of the time I got chased back down home. This is 58th Street; I was from back down 52nd Street. So I wasn’t supposed to come up here. I still would come. After a while I used to come so much that I became friends with the guys up here that was gang-warring the way I was gang-warring. I became their friends. Until this day some of their children play out here; some of their grandchildren I see.”

“Miss Cart was here then. I used to see her out front. I got to know her, and she got to know me. ‘Boy, where you coming from? You’re always here.’”

After getting kicked out of all-boys St. Thomas Moore for discipline problems, Larry graduated from South Philly’s Bok Technical High School (one of the 24 public schools the School Reform Commission shuttered last June) in 1975. After graduation, he joined the Army, where his roommate was a medic, with a penchant for – and access to – hard drugs. Larry was a boxer, and the boxing kept his own drug use in check – until he got out of the service in 1982.

“Before I started actually swimming distance, and getting into the mechanics of swimming, I was a drug addict. That’s all I had time for. And then every now and again, even when I was a drug addict, I would come to the pool. After a while, I got interested into the water, went to rehab. Even when I was at rehab, I was swimming. Then when I came back from rehab, I just took it to another level. I started coming to Sayre every day, to keep myself busy. People in my family that I got high with was betting that I would get high again, and this was just a move I was making for the time being. ‘Just wait, a couple more weeks, and he’ll be knocking on the door with money in his pocket, talking about let’s get it on.’ It didn’t happen. Thank Allah that it didn’t happen.”

“Larry does a lot,” one of the Sayre lifeguards he supervises commented the day I was there to interview him. “He takes pride,” another replied. In addition to pool inspecting and leading swimming lessons, lifeguard trainings, twice-weekly water aerobics, and boating safety classes, trying to maintain the pool itself is a significant endeavor.

“The pools are not being kept up,” he sighs. “There’s a lot of stuff, even in here, that could be fixed. They just – nobody cares. I think before some major work happens in here, this pool will be shut down. Or the University of Penn or Drexel will own it before some major stuff goes. So we just try to maintain.” He and Sayre’s other Water Safety Instructor Thelma once drained the pool and painted it themselves. It took a month and a half – but otherwise it wouldn’t have happened.

“I would like my children and grandchildren to inherit the good times I had at the pools. It’s a lot that’s going on in the neighborhoods that I would like them not to inherit. But it’s gonna be hard. The schools are a mess. We had an abundance of schools with pools that the Department of Rec used to run. They closed. So now they’re talking about maybe four pools compared to eight or ten at one time.”

Larry has been married for 35 years, with five biological and adopted children (four of whom worked as lifeguards at one time). His mother, who taught him to swim, now has Alzheimer’s, and he’d been up most of the night before our interview looking for her after she’d gone out and gotten lost. He also works another job as a court representative for Youth Services Agency of PA, a nonprofit that works with young people caught up in the criminal justice system. When I ask him if there are any other roles he plays, he answers, “Just being a Black leader. I don’t really call myself a leader, but we have a lot of children out here, who there’s nobody to look up to. They don’t see people that come and swim every day, or come to work every day. They don’t see that. But then again, if they look around, they will see it, because I’m here every day. I’m here now, and I’m sick. Thelma comes here if she’s sick. We always come.”