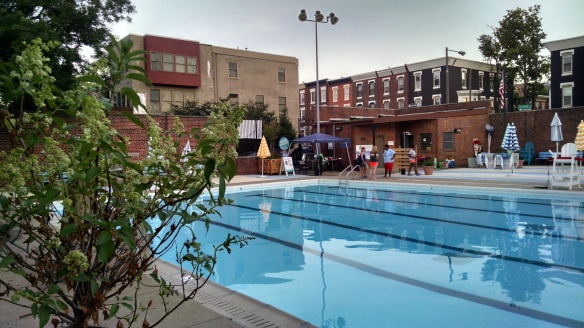 A friend stopped by to tell me about his search for pool opening info. “Why haven’t you posted it this year?” he asked.

I haven’t posted it because there’s been no need! Parks and Rec is on the case. See here for the list of pool opening dates that, like last year, the City posted over a week in advance.

This may not seem like a big deal, that a City department would let the public in on how to use the amenities it provides. But in this case?

I started this blog in large part because basic pools info like this was so hard to find. Years past, in the weeks before pool season started, I’d be popping up at Parks and Rec facilities where I knew people, looking for someone who had the pool openings list, and was willing to share it.

The list was not easy to come by. It existed only in hard copy. Many people didn’t have it. Some who did would let me look but not take it with me. Generally, securing a copy involved a meeting late at night, for a surreptitious hand-off of one single, precious, creased and faded sheet of printer paper.

The first year I published the pool openings list (having spent hours compiling the location info), another Parks-and-Rec-employed friend called me in a panic. “Did you get that list off my desk when you were at the rec the other day?” she asked. “Because if you did, I need you to take it down.”

Later that day, I did find the list available deep within the City’s website. It was an electronic version of the previously described piece of paper. It listed pool names, but no addresses, intersections or other info that might help someone actually get to one. And this predated the helpful map Parks and Rec has since posted.

To be honest, the fact that Philadelphia’s huge network of public pools operated with such stealth was part of its initial charm for me. Like so much in our City infrastructure, the pools relied on an oral tradition. People from a neighborhood knew their pool. They knew, or heard, or figured out when it was open for the activities they were looking for (and, to be fair, there were sometimes signs). For a non-native Philadelphian like myself, catching onto the secret felt like a step closer to really belonging here.

I will miss the thrill of the hunt for opening info, to say nothing of the search for the pools themselves. But even more, I appreciate the leaps the City has made in communicating about these summer sites of wonderfulness.

I am so excited for opening day on Thursday, and the two months thereafter, when there will be 69 more locations for immersion in calm cool chlorinated blue. There is nothing I love more at the end of a swamp-like city summer day.

I visit the pools just about every evening during pool season. “You must be a really good swimmer,” people say. But most of the time I don’t swim, in the active sense of the word. I dip and I dunk and I float and I loll by the wall. Washing the worries of the day away. And soaking up enough refreshment to make it through another 24 hours.

Here’s what else I am excited for this season:

My plan this summer is to get back to writing pool profiles (the last one I did, about J. Finnegan, appears to have been two years ago now), returning to West and Southwest Philly. I will miss running into Water Safety Instructors Larry Brown, who retired last summer, and Herb Brown (no relation), who passed away over the winter. Between them, I’d guess Larry and Herb had a hand in training many if not most of the thousands of lifeguards who’ve worked for the City in the past few decades. I know I will never forget my training with either of them. Rest in peace, Mr. Herb.