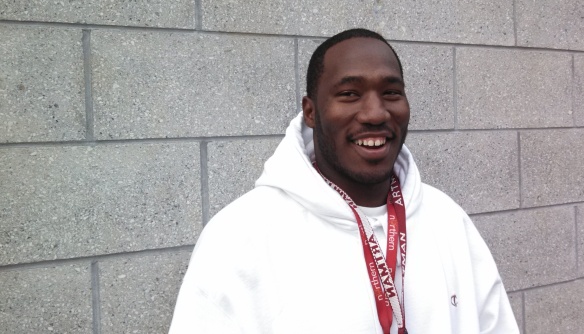 First pool experience: Kingsessing Pool in 1991 (getting pushed in and nearly drowning)

Work with the pools: As a lifeguard at Kelly Pool for eight summers from 2000 to 2013

With 19 rescues, Michael Daniels saved more people from drowning this past summer than any other City of Philadelphia lifeguard. He takes the role seriously. But ask him why he became a lifeguard – or what motivated him to earn his Water Safety and Lifeguard Instructor certifications this fall – and he’ll tell you, “Chicks dig lifeguards.” He says it with a straight face, but also how he says most things: with laughter soft-shoeing around in his voice, like at any moment it might burst out from in between the syllables.

Mike’s good humor is infectious. It’s humor that grows out of struggle. “I wasn’t always an angel. When I was growing up, I did what the average kids in the urban area do. Spraypaint on walls. Graffiti. Vandalism. Stealing cars. I was bad. I was so bad that in fourth grade I got a EH-21 out of the Philadelphia public school system. In layman’s terms, I got kicked out the school district. I got locked up in a group home type thing. A judge got me back into the school district.”

“My sixth grade teacher was Miss Jeanie Walsh, at William Levering Science Magnet School [now closed] on Ridge and Gerhard in Roxborough. The very first day of school, in sixth grade, I walked into her classroom, and I said, ‘I’m not gonna make it.’ And she looked at me. She tilted her head and lifted her glasses up, and she looked at me, she looked at my name, and said, ‘Michael Daniels, you will make it. I will make sure you make it.’”

“That encouragement she gave me, I never forgot it. I thought I wasn’t going to make it through sixth grade. At that time I don’t know how I made it to sixth grade. I never listened to the teachers; I never stayed in class; I never did my work. The Philadelphia School District is overcrowded. You got like 30, 40 kids to one teacher. I’m not going to say people can’t learn that way, but it’s kind of hard when you’ve got 30 and 40 kids to one teacher. I think some of the teachers just passed me so they didn’t have to deal with me the next year. But to this day I still remember Miss Walsh. She’s out there somewhere. And I always told myself – since I could never find anything to pay her back – I said: I will pay it forward. So now, if I see anybody with that ‘I can’t do it,’ I want them to say, ‘You know what, I can do it.’ To take that negative core belief out their head and change it into a positive belief.”

Mike got into swimming at 14 to keep himself out of trouble. He started at Sayre-Morris Pool, taking tips from Larry and Thelma, then moved five blocks west to Cobbs Creek. “Back then, the Fairmount Park Commission [which – before it merged with the Department of Parks and Recreation – ran Cobbs Creek, Kelly and Hunting Park Pools] used to have this Junior Lifeguard Program,” Mike recalls. “I wasn’t actually old enough to be a lifeguard, so I was a junior lifeguard – I would help them out around the pool; they would show me how to swim properly, things like that. I could always swim underwater, frog-style, but I couldn’t swim front crawl. I couldn’t swim on top of the water. I would go three to four times a week, and the lifeguards would say ‘work on this, work on that, work on your kick, work on your swim stroke, work on breathing.’”

“When they were redoing Cobbs Creek Pool, they sent the lifeguards from Cobbs Creek to Kelly’s, and I just followed them down there. Since then, even when Cobbs Creek opened back up, I never went. I just loved Kelly’s. Took myself about three years to get to the swimming level where I was comfortable that I mastered it. Then shortly after that, Mike Murray – he was the director at Kelly’s Pool – gave a lifeguarding class. So I took the lifeguarding class, and I passed it with flying colors, and since then I’ve been a lifeguard.”

Kelly Pool is Olympic-sized, and – unlike most Philly city pools – has a section deeper (at seven feet) than most adults are tall. “It’s pretty deep, and you get people who think they can swim, and then when they don’t feel the bottom they give up and just sink, instead of trying to swim out. Myself and my co-worker Devyn, we had the most saves in the city this year. The primary purpose of a lifeguard is to prevent a drowning. So if you can prevent a drowning from even occurring, then you did your job. But when a drowning does occur, you also want to do your job. And I mean, every time it happens, every time you save someone – you can’t replace that feeling.”

Mike didn’t just make it through sixth grade – he graduated from Plymouth-Whitemarsh High School. Afterward he served in the military, and in addition to lifeguarding year-round (at private facilities in the non-summer months), now does loss prevention work, sings and writes his own music. He’s got three kids and another on the way. He says of them, “I want my children to have better than I had. My father wasn’t always there. I would like Philadelphia to be a city of fathers, where fathers get involved with their children. I would love for Philadelphia schools to improve. To see how some people are struggling – I don’t want that for my family, my children. I don’t want that for anybody.”